I enjoyed reading David McCullough’s book, The Wright Brothers and learning more about Orville and Wilbur Wright.  They were, of course, the two men who gave us powered flight.

A couple of years ago we traveled to Dayton, Ohio to learn more about aviation.  It’s the home town of the Wright brothers as well as the site for the National Museum of the United States Air Force.

The museum occupies four hangars at Wright Patterson Air Force base.  There’s a fascinating assortment of aircraft on display, ranging from early flyers to spacecraft .  As you walk through the galleries, you literally see the history of aviation.

The Early Years area features an interesting exhibit on the Wright brothers.  They started out manufacturing their own line of bicycles and running a repair shop before they got more serious about flight.  You can see where the concept of a bicycle-type chain drive carried over to their early flyers.

Orville and Wilbur Wright made their historic first flight at Kitty Hawk, North Carolina on December 17, 1903.  The machine was damaged beyond repair at the end of that day, but certain parts of it were saved.  A display case in the museum holds a piece of wing canvas from that original 1903 flyer.

On Fridays the museum offers Behind the Scenes Tours.  You’re shuttled by bus to hangars about a mile away from the museum and given a tour of their restoration area.  The project everyone wants to see is the Memphis Belle.  This B-17 Flying Fortress is one of the most famous aircraft in history.  It was the first bomber to complete twenty-five missions over Europe and return to the United States.  The aircraft has been the subject of a couple of movies and a documentary.

Robert Morgan was the pilot of the Memphis Belle.  He named the aircraft for his girlfriend, Margaret Polk, from Memphis, Tennessee.  The romance didn’t last, but the plane did.

After thirteen years of restoration, the Memphis Belle is scheduled to go on display May 17, 2018.  It will be featured in the WW II Gallery.  Below are some photos in the work area. 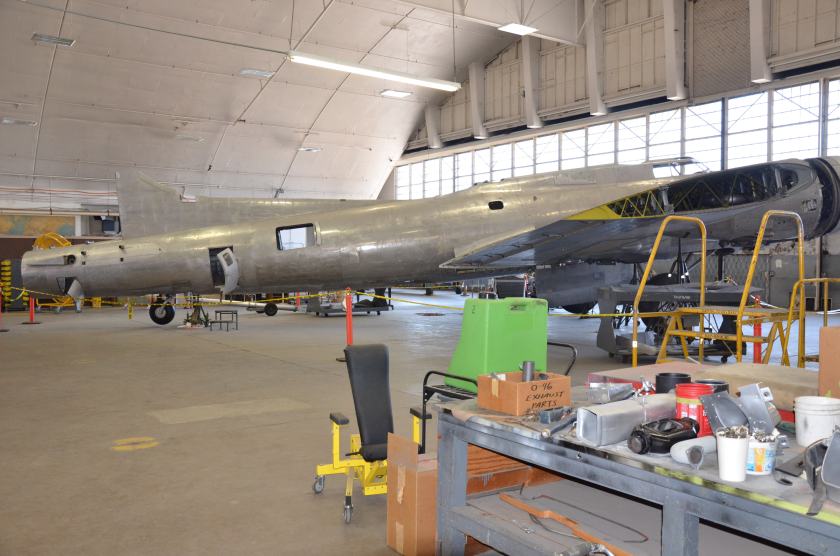 Another place you may want to visit in Dayton is the 1841 Woodland Cemetery and Arboretum.  It’s located on 200 acres of rolling hills, and is known for its trees and plants as well as the persons who are buried there.

The cemetery’s chapel, entrance gate, and office building, completed in 1899, are on the National Register of Historic Places.  They were built in the Romanesque style of architecture that was popular at the time.

Inside the chapel there’s a beautiful Tiffany window.

With a tour map, “The Wonders of Woodland Guide to Interesting Trees & Monuments,” you can drive or walk to the various points of interest.

One of the most visited gravesites is that of Orville and Wilbur Wright.  Other noted persons buried in Woodland Cemetery are columnist Erma Bombeck, George Huffman (Huffy bikes), and George Mead (Mead Paper Co.)

The highest elevation in Dayton can be found at Lookout Point, on the north side of the cemetery.  There’s a great view of the downtown area from that hilltop.