I love Christmas and all the special events that go with the Season.  So this year I decided to do things in grand style with a trip to Europe to see how the Holidays are celebrated in the Old Country.

Mike and I and three of his cousins booked a Rhine River cruise for early December.

Chris and Norm traveled from Oregon, and Jan came from the state of Washington. We all met in Basel, Switzerland.

Our voyage was titled “Rhine Holiday Markets,” and as the name suggests, had an emphasis on the Christmas Markets along the way.  We visited eight cities in as many days.

The origins of the Christmas Markets can be traced back over 500 years ago to Nuremburg, Germany.  They initially offered citizens a chance to stock up on goods for the coming winter months.  These markets of everyday staples eventually evolved into Christmas markets with its decorated stalls. Over the centuries, the markets brought cheer, color and light in the long, cold winter months.

Something I noticed in all the cities we visited – Europeans decorate with white lights, never any of the colored bulbs we see here in the U.S.  This probably goes with the tradition of candles at the early markets.

Our travels began in Basel, Switzerland.  The Swiss are famously independent and stayed neutral in both World Wars.  They declined to join the European Union, and still use the Swiss franc as their currency.  You can make purchases with Euros, but you’ll get francs in return as change.

Switzerland has five official languages – German, French, Italian, English, and Romansh.  Romansh is spoken in the southeastern region of the country and is derived from Latin.

The city of Basel is an industrial and technology center with a high number of foreigners in residence.  Thirty-six percent of the population is not Swiss.  In religious beliefs, it’s about half Catholic and half Protestant.

Basel is known for its fountains.  Over 300 are scattered throughout the city.  On the fountain pictured below is a basilisk which is associated with Basel.  Basilisks are a mythological animal that can be described as a cock with dragon’s wings, having the beak of an eagle, and the tail of a lizard.  If you’re a Harry Potter fan, you read about them in  J.K. Rowling’s books.

After our city tour, we enjoyed the market in Basel.

Before leaving Switzerland, we took a bus trip to the central part of the country to visit the beautiful city of Lucerne.  I live in a town with two covered bridges, so I was most looking forward to seeing Lucerne’s Chapel Bridge, a covered footbridge that dates to 1333.  It is the oldest truss bridge in the world and measures 672 feet long.   I walked over the bridge twice and took photos of the wonderful old paintings that can be seen up in the interior triangle of the roof.  The paintings show events from Lucerne’s history. 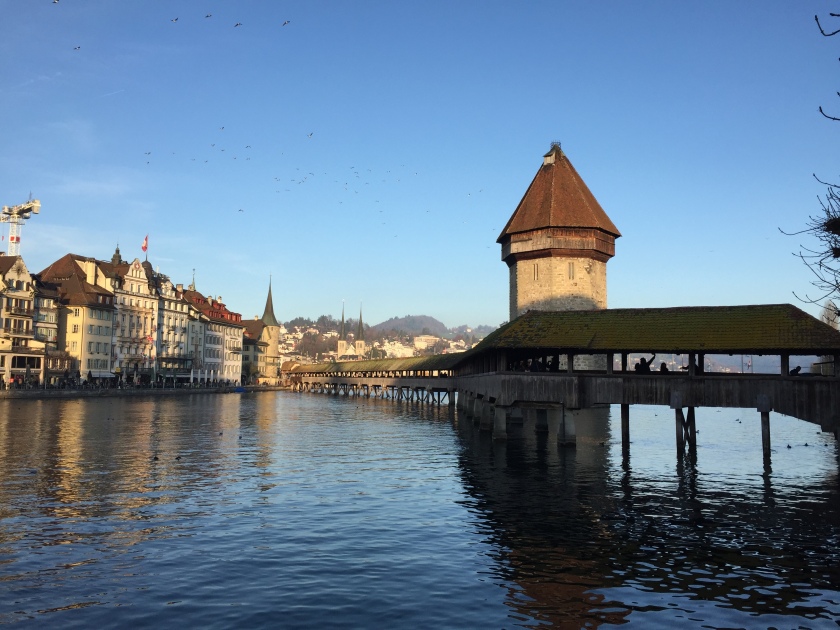 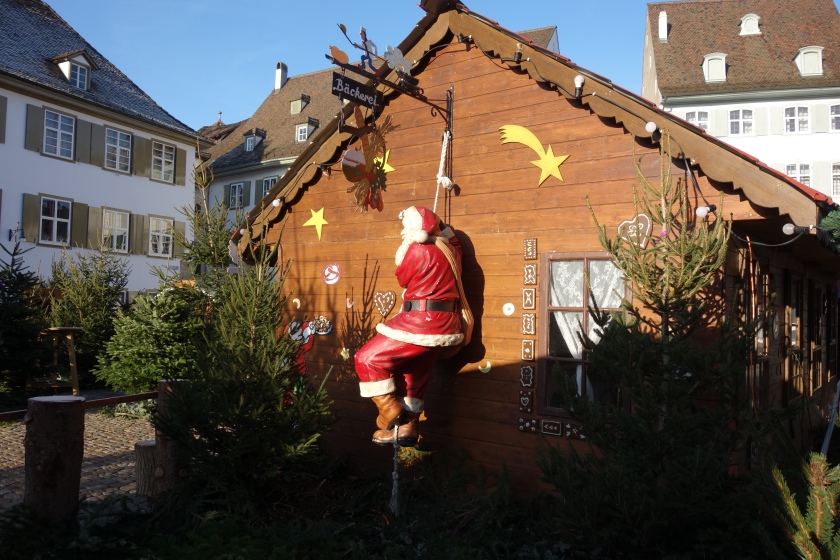 After visiting Basel and Lucerne, we set sail up the Rhine to the next city.  We went through a series of locks in rapid succession and completed a total of ten.  1st Captain Menno Van Meerveld was our Dutch captain of the ship.  He ably piloted us on the busy river.

The mighty Rhine has always been a major trade route in Europe. It flows north from the Alps in Switzerland through six countries and eventually drains into the North Sea in the Netherlands. Today there is still a steady stream of barges transporting goods.  We learned that captains need special training and certification to navigate the Rhine. 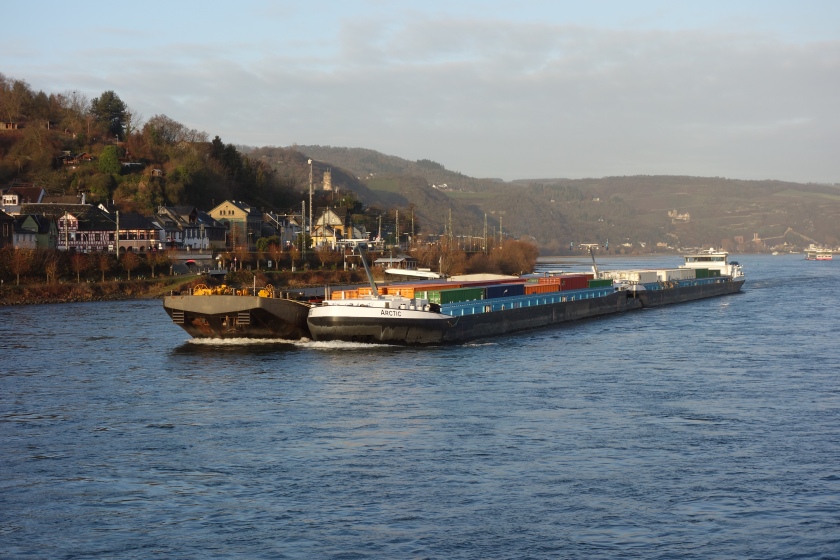 Our floating hotel for the next eight days was the S.S. Antoinette, owned by Uniworld Boutique River Cruises.  We shared the longship with 129 other passengers.

The lobby featured a 10-foot blue Strauss Baccarat chandelier that once hung in New York City’s Tavern on the Green.

The ship had a nice lounge, and the five of us spent time there playing cards and dominos.  We also had musical entertainment a couple of nights later in the cruise.  The most enjoyable extra for me was a lecture on European Holiday Traditions that was given by a local historian, Rebecca Hajek.

The food was prepared by our executive chef, Peter Magac.  Toward the end of the tour we had a cake decorated with a map of our cruise.

We spent the third day of our cruise in Strasbourg, France which is located in the historic region of Alsace.  It’s a lovely city known for its well-preserved, half-timber buildings.  It’s also the official seat of the European Parliament, and along with Brussels and Luxembourg, is one of the three main capitals of the European Union.

We took a tour of the Cathedral of our Lady and checked out the astronomical clock. 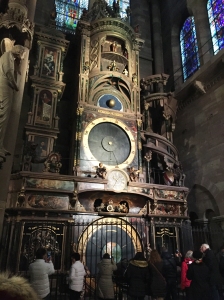 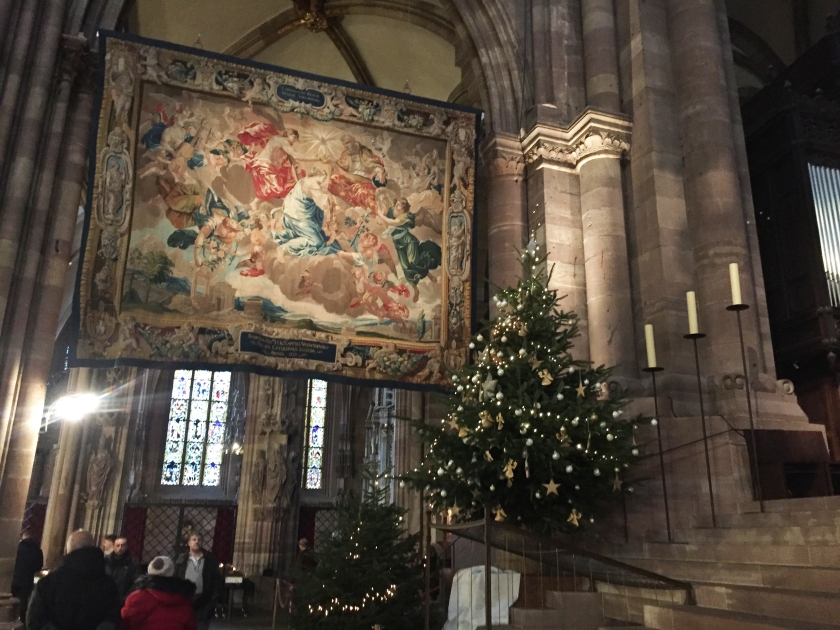 The stores were beautifully decorated for the Holidays. 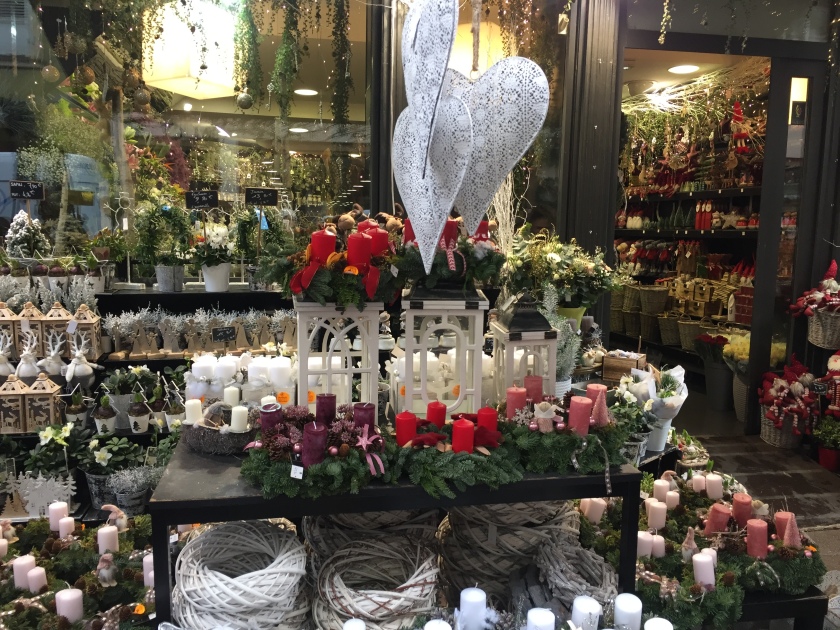 We continued our journey to Heidelberg, Germany.  I liked Heidelberg.  It’s a college town with the oldest university in Germany (1386) and the third oldest in Europe.  The university is well-respected and boasts eleven Nobel Prize winners, with five of them in the field of medicine.  Heidelberg was spared much of the bombing of WWII and has a classic old European feel about it.

The first half of our day was spent exploring Heidelberg Castle.  It’s a rambling mix of buildings dating from 1214.  Much of it is in ruins, but overall the castle has great appeal. 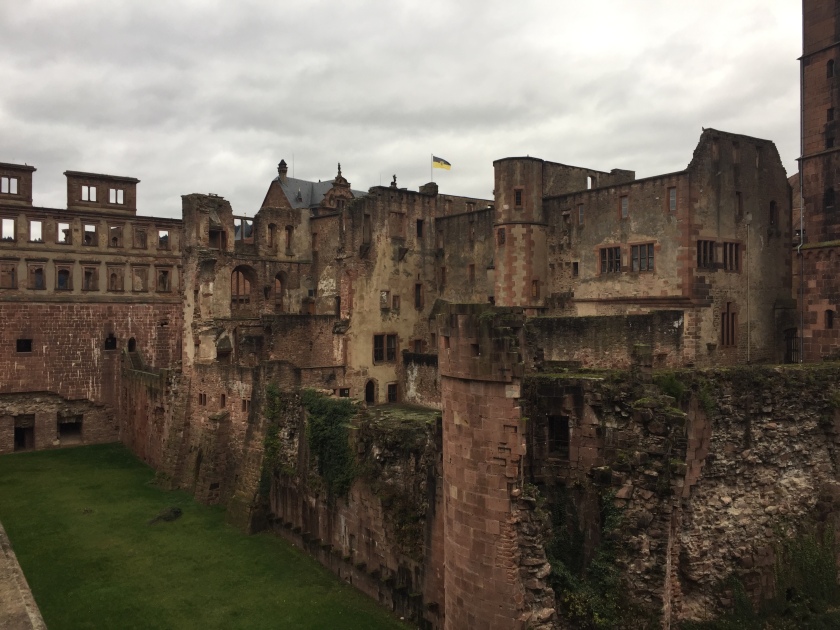 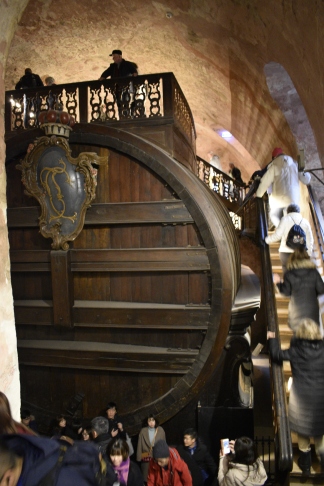 Located in the cellars of the castle is the Heidelberg Tun, a giant barrel that held 58,000 gallons of wine.  Supposedly 130 oak trees were used in its construction.

During the Romantic Movement of the 1800s, artists painted the castle ruins and the surrounding landscape.  Mark Twain described Heidelberg Castle in his 1880 travel book, A Tramp Abroad.

Our group took the funicular from the castle hill down to Main Street.

We had lunch at a lovely restaurant called the Golden Falke. 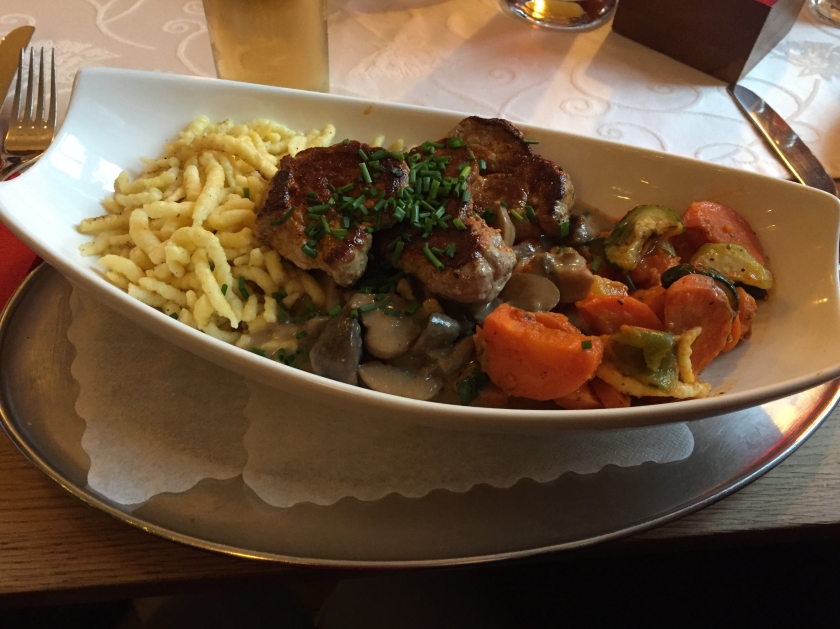 During the afternoon we walked around the Christmas Markets and along the river. 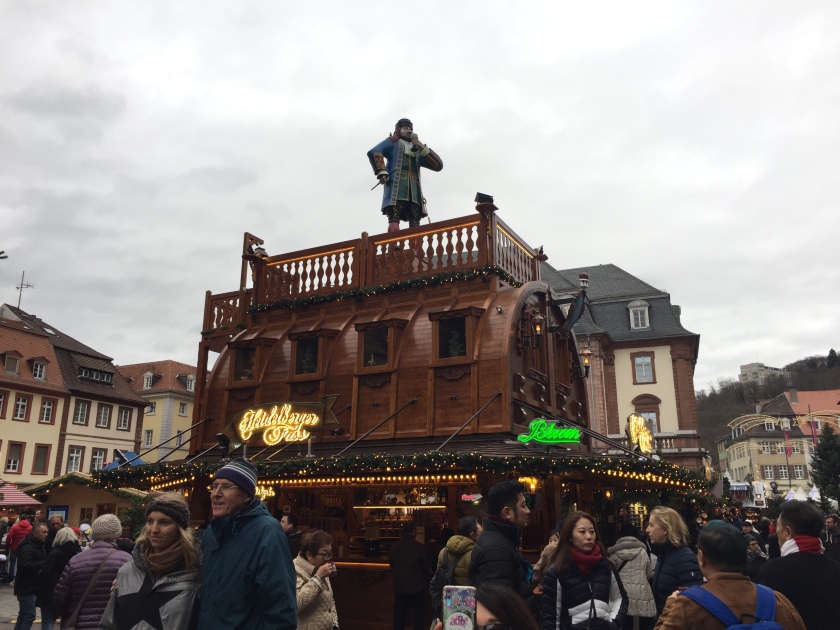 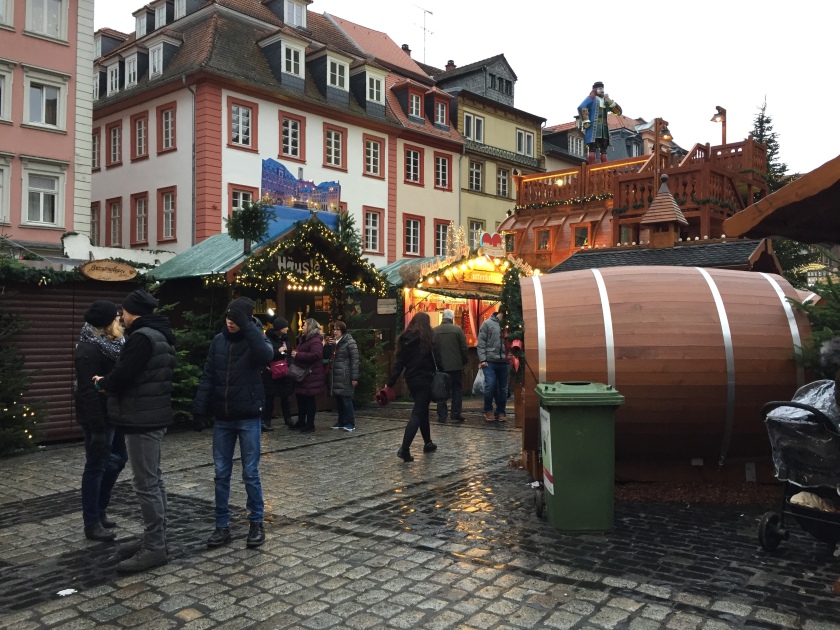 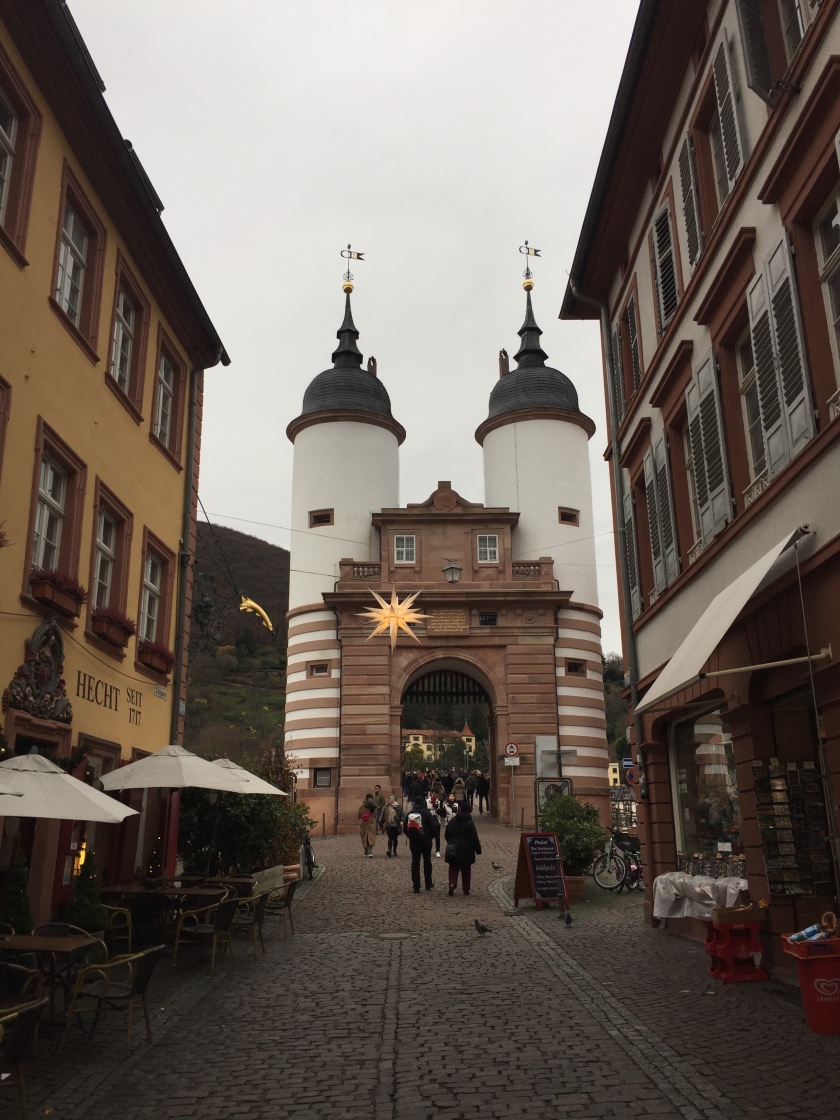 On to Wiesbaden.  This town was made famous by its thermal springs and spas.  In the 1800s, the rich and famous gathered to enjoy the baths and do some gambling, which was also popular.  Among the visitors back then was Fyodor Dostoevsky, Johannes Brahms, and Richard Wagner. 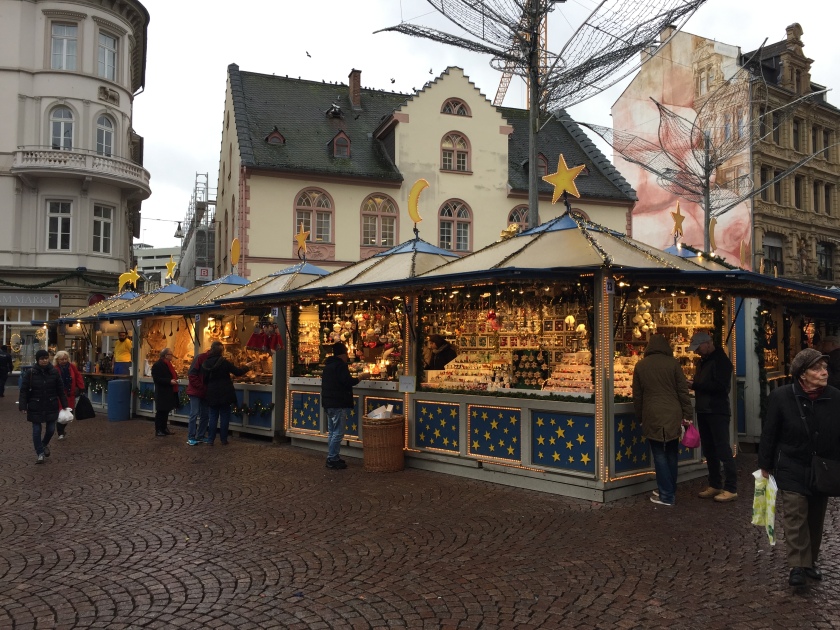 I liked the Christmas market in Wiesbaden.  It had a unique color theme of blue and gold.

Rudesheim was another charming town.  Riesling wine is popular in this area of Germany. 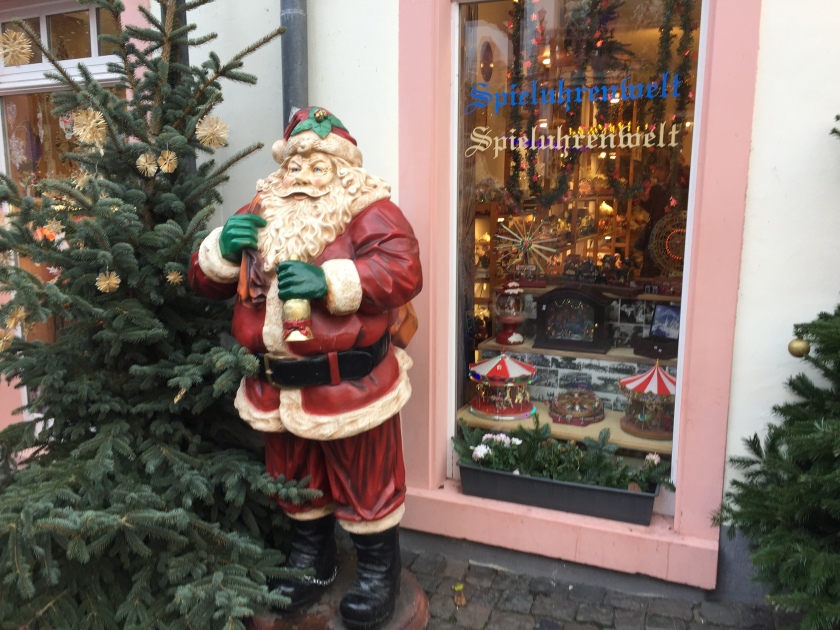 You’ll also want to try Rudesheim coffee when you’re in town.  All the coffee houses serve it. 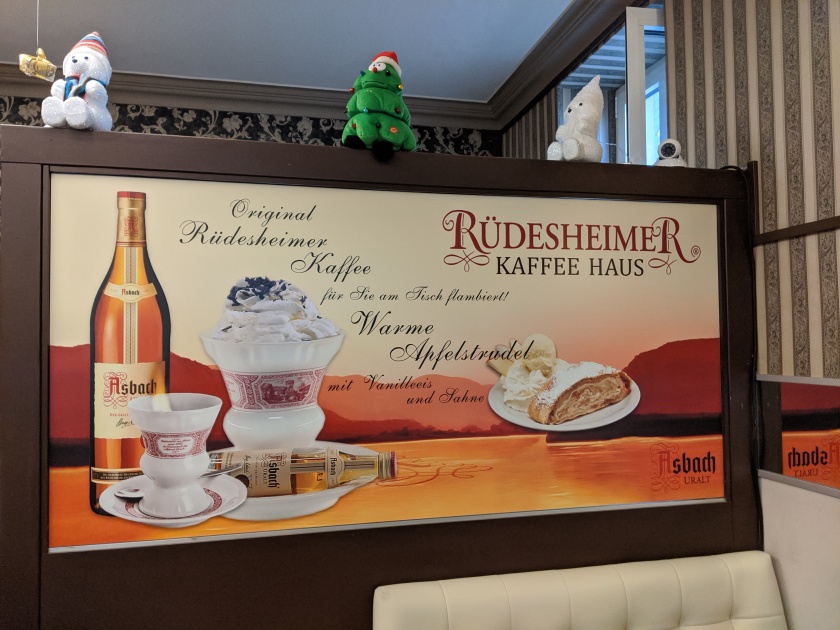 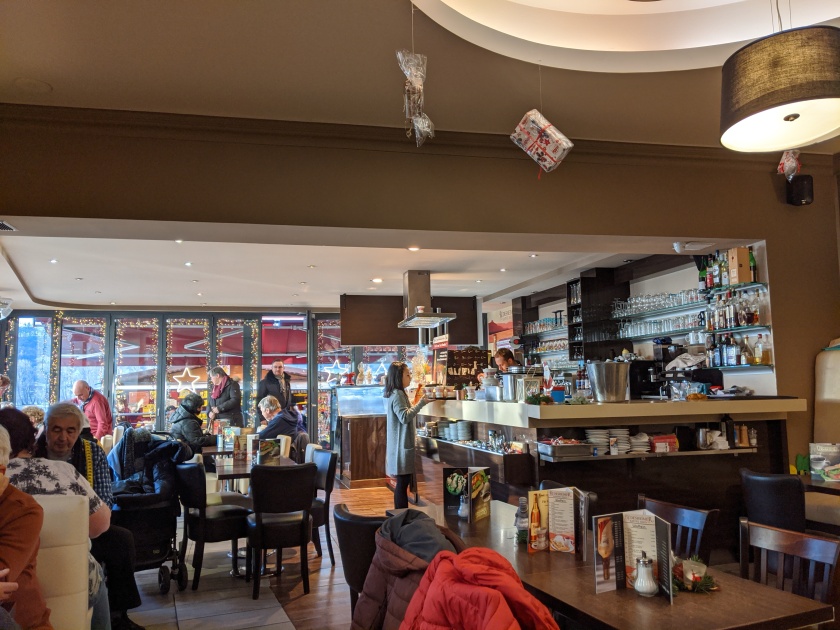 The drink was invented in 1957 and combines local Asbach Uralt brandy and coffee.  In Rudesheim, it’s served in a special cup.  To make the coffee, flambé brandy and sugar in a cup to dissolve the sugar.  Add hot coffee and top with whipped cream and chocolate flakes.  Delicious!

On day 6 of our cruise we sailed through the Upper Middle Rhine Valley.  It’s a UNESCO World Heritage Site and featured 21 castles perched on steep cliffs.  Down below were picturesque villages and lots of church spires.  This stretch of the river is sometimes called the Romantic Rhine. 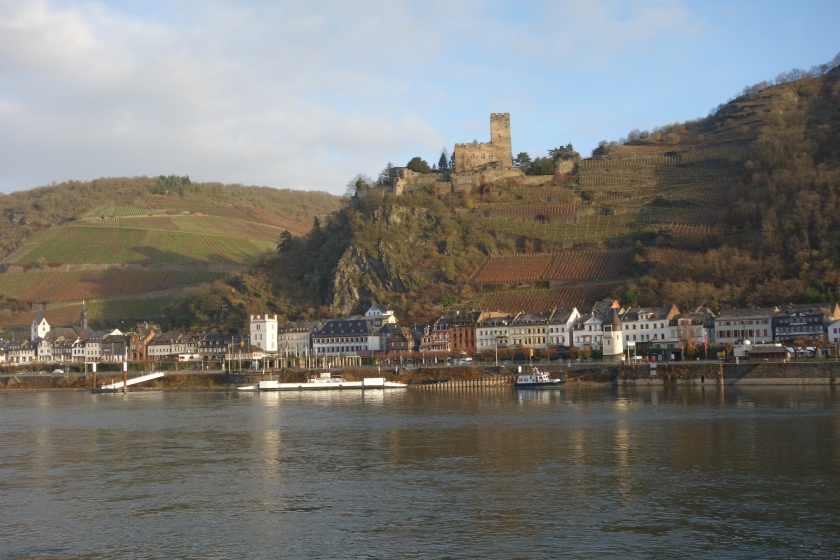 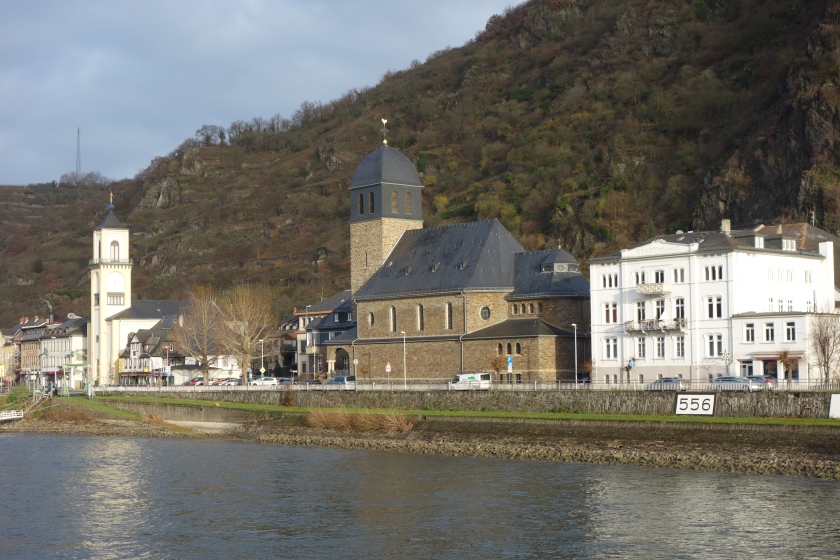 During Medieval times, the princes who owned the castles taxed passing merchants on the river.  Ships could only proceed if they paid a duty to this local ruler.  If the merchant refused to pay, the prince confiscated the ship and its cargo.   That’s where the term robber baron comes from.

We passed through an area known as the Lorelei.  According to legend, sailors became distracted by a beautiful singing maiden at the top of the cliff and crashed their ships.  In truth, it was a dangerous area of the Rhine with swift currents and rock ledges that caused accidents.

A statue at the bottom of the cliff pays tribute to the mythical Lorelei.

There was some agreement during WWII that historic buildings and sites would not be a target for bombing.  So the Germans set about building historic-looking structures over their railroad tunnels to avoid bombings that would interrupt their transportation system.  You can still see them today.

After the castle viewing, we arrived in Koblenz.  This city is important for its location at the confluence (where two rivers meet) of the Rhine and Moselle Rivers.  It was heavily bombed during WWII and 87% of the city was destroyed.

A major historical site is German Corner – the point of land where the Rhine and Moselle meet.  The space is dominated by a large statue of Kaiser Wilhelm I.  It was dedicated in 1897 as a tribute to the leader for unifying Germany in 1871.  The statue was damaged in WWII and removed.  After the war, when Germany was divided into the communist east and the capitalist west, German Corner became a symbol of the hope for a re-unified country.  That happened in 1990; three years later the statue of Kaiser Wilhelm was reinstalled.  Today visitors can also see three sections of the former Berlin Wall that were dedicated to “the victims of the division.”

Koblenz had some nice markets and shops, too. 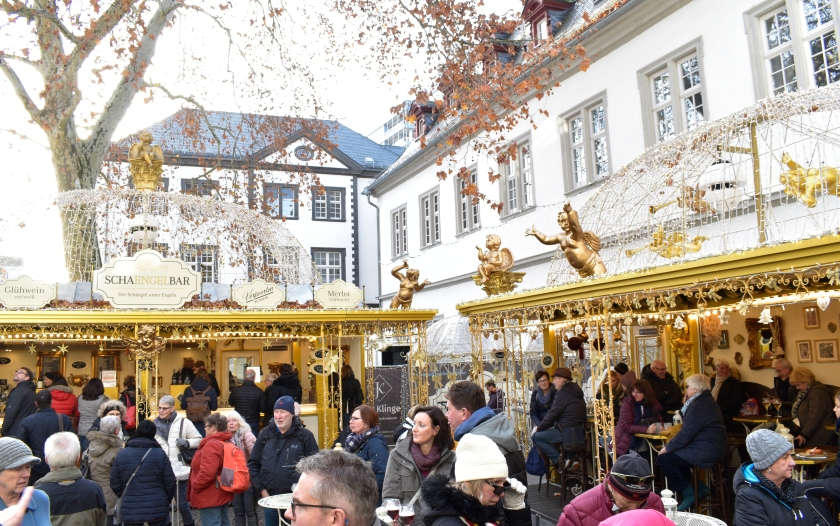 The small windows in the roof of the City Hall building, above, serve as an Advent calendar.  The number of each day is added, and at night they are lit up.

Our final stop was Cologne, Germany.  It’s the country’s fourth largest city after Munich, Hamburg, and Berlin.  Cologne was another city that was heavily bombed in WWII.  Nearly 92 % was destroyed in the war, and that’s because it was a transportation hub.  Today over 1,500 trains per day pass through the railway station.

You can’t miss the majestic Cologne Cathedral in the city center.  Construction began in 1248.  Cologne is still a Catholic stronghold in Germany.  The cathedral is Cologne’s most visited landmark with an average of 20,000 people a day. 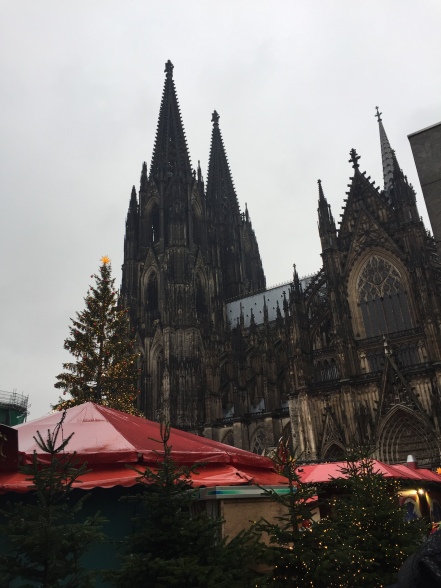 The gold sarcophagus is believed to contain the bones of the Three Magi.

Outside the Cathedral were several Christmas markets.  The city had a total of seven markets.  Businesses were nicely decorated, too.

A travel experience isn’t complete unless you try the food specialties of the area.

Switzerland is about chocolate, and we sampled several kinds.  Our guide told us that Lindt makes a chocolate exclusively for Switzerland, and the rest of the world gets another recipe.  But it’s all creamy and delicious no matter what you have.

I like gingerbread and that was easy to find in the markets.  A variation called Lebkuchen became my favorite.

A popular drink at the Christmas markets is gluhwein, a hot spiced wine served in a small, ceramic mug.  Each market has its own unique mug that is decorated and may feature the name of the city and some local landmarks.  I made it a point to purchase one from each town we visited.

I really enjoyed my holiday cruise of the Rhine River.  On one of the last days, the pastry chef made a birthday cake for me.  I also had a chance for a photo with Captain Van Meerveld.

This was a Holiday Season I won’t forget.