Grand Detour, Illinois is proof that good things come in small packages.  It’s a picturesque little village located on the Rock River, in the northwest part of the state.  Indian legend says that the river found the land so beautiful that it turned around for a second look, thus creating the bend in the river for which Grand Detour is named. 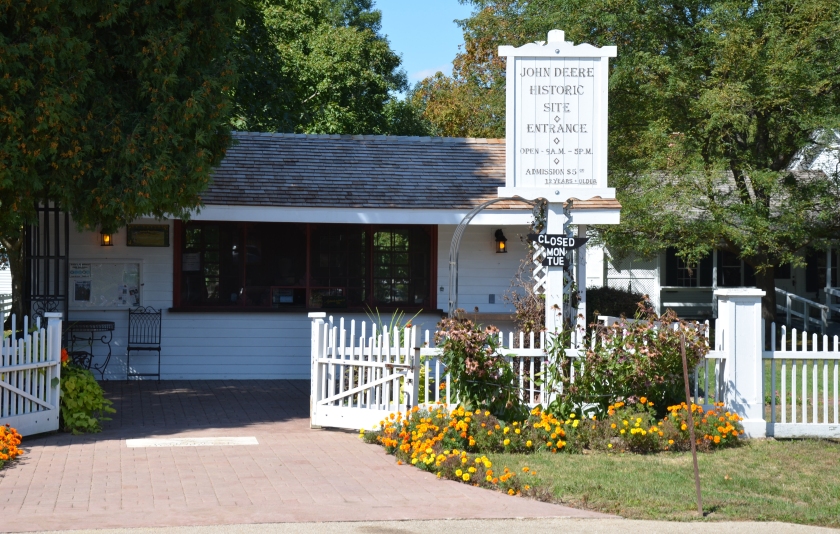 It’s best known as the place where the John Deere company got its start.  Mr. Deere was running from bankruptcy in his native state of Vermont when he arrived in Grand Detour in 1836.  He was skilled as a blacksmith and quickly found work shoeing horses and oxen, and making farm implements like pitchforks and shovels.

Farmers kept telling Deere that the rich Midwestern soil stuck to their plows, and they were forced to stop every few feet to scrape off the moldboard.  Deere invented a highly polished plow that cut through the sticky prairie soil and let it fall cleanly away.

Word soon spread of this new plow, and the business grew rapidly.  In 1848, Deere moved his operations from Grand Detour to Moline, Illinois.  Moline is located on the Mississippi River and offered better shipping and water power.  Deere & Company’s world headquarters is still there today.

The John Deere Historic Site in Grand Detour has preserved the early Deere heritage with an interesting pioneer village that you can tour.  It reminds me of a mini-Colonial Williamsburg.  The Deere corporation financially supports the site, so it’s well maintained and thoughtfully interpreted.

The grounds include John Deere’s 1836 home and an archeological exhibit showing where the original blacksmith shop was located.

You can also visit a replica of a pioneer blacksmith’s shop and see how Deere worked back in the day. 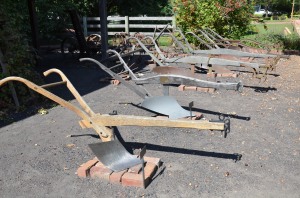 There’s a good display of plows just outside the blacksmith shop. (Although most people today associate Deere & Company with tractors, John Deere himself is known for the plow.  He died years before the company entered the tractor market.)

Every fall the John Deere site hosts the Grand Detour Arts Festival.  This is the 68th year for the event, and you’ll want to mark your calendar for Sunday, September 11th, 2016 from 9 a.m. to 4:00 p.m.  It features artists’ booths, music and food, along with a chance to see the historic site.

Just a few blocks north is the lovely St. Peter’s Church, built in 1847 with locally quarried limestone.  It was originally an Episcopal church but today is non-denominational and a popular location for weddings.

And you’ll find some other historic properties if you take a drive around the village.

Grand Detour – it’s inspiring to think that from this charming little village, John Deere founded a business that is currently the largest agricultural machinery company in the world.  You’ll enjoy seeing its humble beginnings.

River towns have always had a certain appeal to me.  Their history can be as deep and complex as the water they sit on.  So I decided to take a look at Burlington, Iowa, located on the mighty Mississippi.

Like many towns in the Midwest, Burlington is named for somewhere in the eastern United States.  (Burlington, Vermont, in this case.)  The Iowa Burlington has a background of fur trading, steamboats, railroads, and manufacturing, all of which have left their mark on the city.

River towns often have an iconic bridge that makes it to the postcards.  In Burlington, it’s the Great River Bridge.  I like the easy-to-remember name. 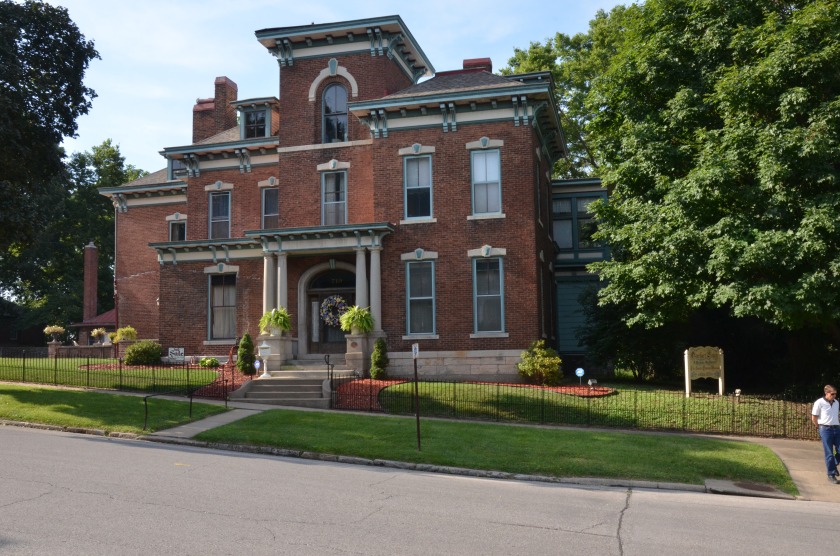 After crossing the bridge to enter town, we headed up to the Heritage Hill neighborhood and found enormous homes.

They were built by successful river barons and other merchants.  There’s a variety of architectural styles to appreciate with these mansions, or you can just group them altogether in my husband’s simplified category of “big-ass houses.”  Either way, a walk around this historic district will leave you impressed.

While you’re in the Heritage Hill area, be sure to drive down Snake Alley.  It will remind you of Lombard Street in San Francisco.  Snake Alley was built in 1898 to connect the hilltop area with the downtown shopping district.  Three clever German immigrants came up with the idea to make a winding street down the steep elevation, something they learned in the Old Country.  Bricks were laid at a slight angle so horses could get a better footing as they went down the alley.  Today it’s one-way from top to bottom so don’t attempt to drive up it.

For lunch or dinner, try Big Muddy’s Bar & Grill on the Mississippi River.  It’s located in a former nineteenth-century freight house that’s listed on the National Register of Historic Places. The views while you’re dining are beautiful.  Inside, there are two markers on the wall to indicate the level of flood waters in 1993 and 2008.  For their efforts at restoration after these disasters, Big Muddy’s received a community award.