Mackinac Island, Michigan, located in Lake Huron between the state’s Upper and Lower Peninsulas,  has the flavor of a 19th-century seaside resort.  There’s elegant Victorian mansions, horses and carriages, and plenty of beautiful lake views.

Adding to that old-timey feeling is the lack of modern transportation.  Cars have been banned from the island since 1896.  To get around, visitors and residents walk, or ride bikes or carriages. 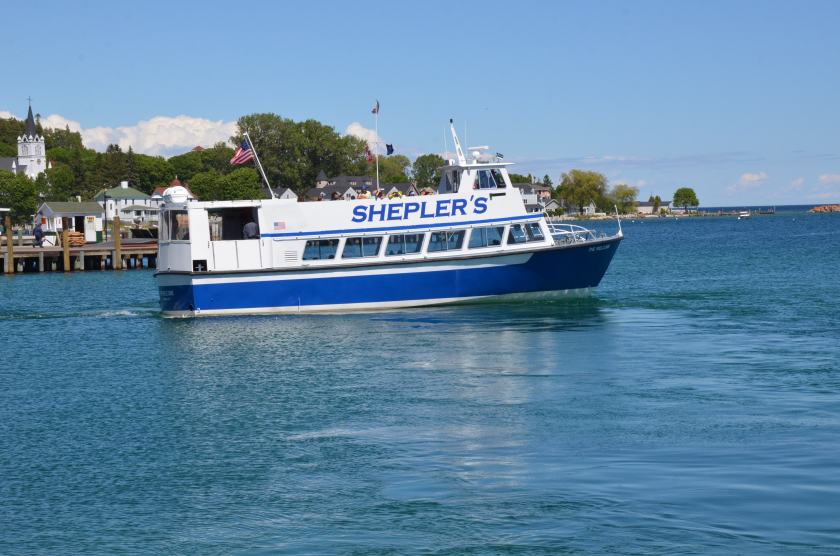 Most people arrive on Mackinac Island by ferry.  We took Shepler’s Ferry, and they run like a well-oiled machine, transporting people, luggage, and bicycles from the mainland to the island.  It’s about a twenty-minute ride.

As you approach the island, you’ll see the Round Island Lighthouse, completed in 1895.  Though no longer used, it’s a great historic icon to photograph.

The tourist season runs about six months, from May through October.  I was surprised to learn that over 500 permanent residents stay on the island year round.  In the winter time, when the Strait is frozen, they use snowmobiles to get to the mainland.  Planes also bring in supplies via the island’s small airport. 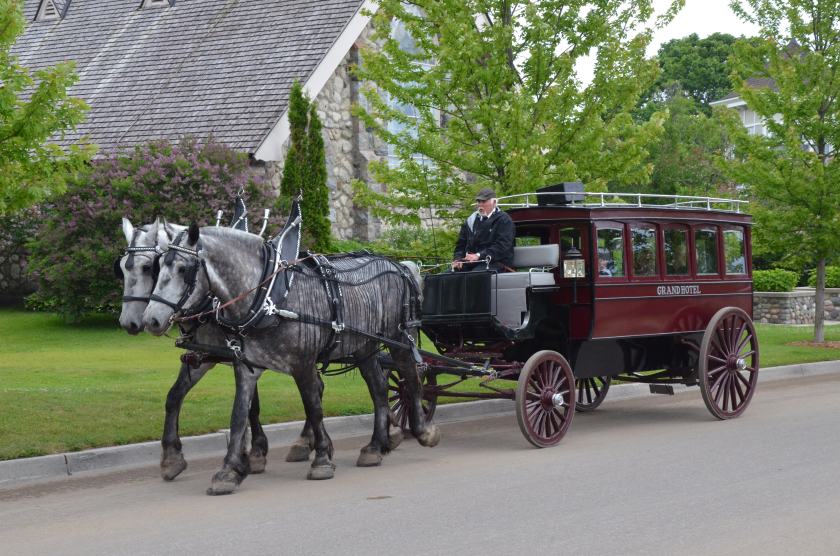 The clip-clopping of horses’ hooves is a familiar sound on the island.  During the tourist season there’s about 500 horses brought from the mainland to pull wagons and carriages and haul all the stuff needed for day-to-day island life. 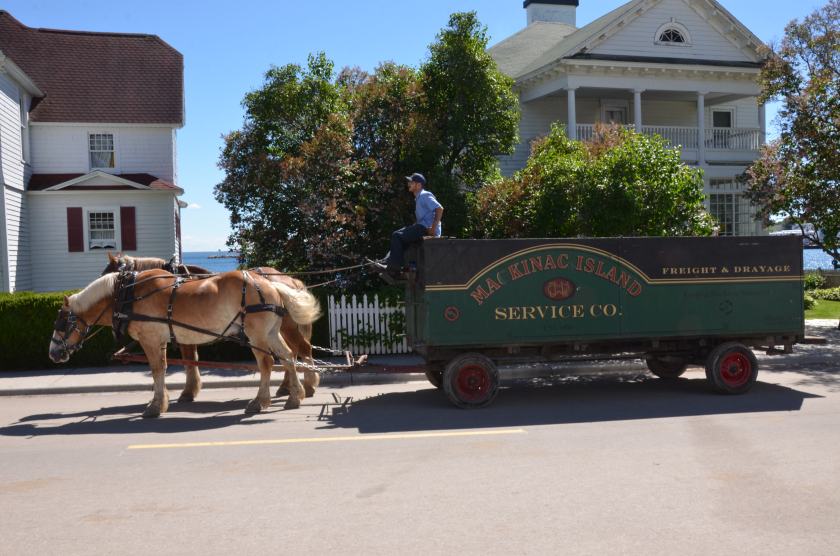 Horses are paired up at the beginning of the summer and stay with their partner throughout the season.  Some of the horse names I heard were May & June and Queenie & Dolly. 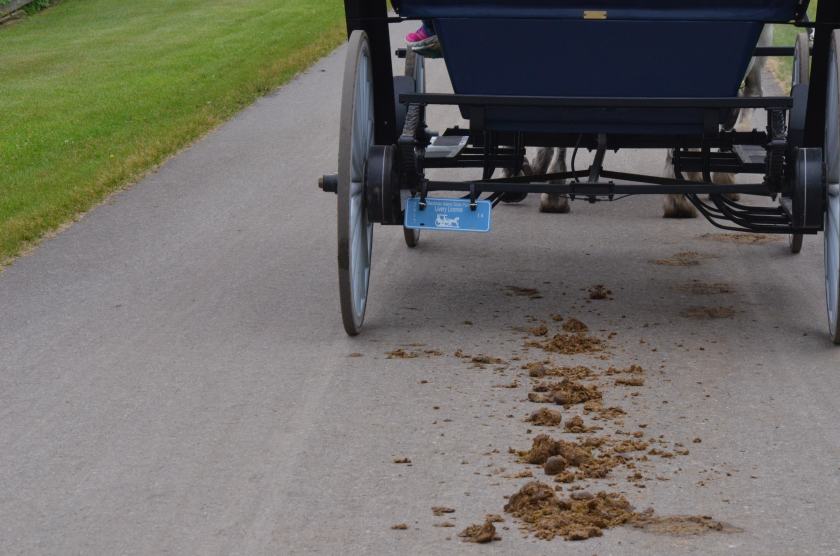 They can leave a bit of a mess behind on the streets, but crews come along and keep things fairly tidy.  Just watch your step when you’re out biking or walking.

At the end of October the horses are led down to the dock where they are loaded on a ferry.  Many of horses stay in Michigan; others are dispersed to Minnesota and some as far away as Florida.  They’ll be back next spring. 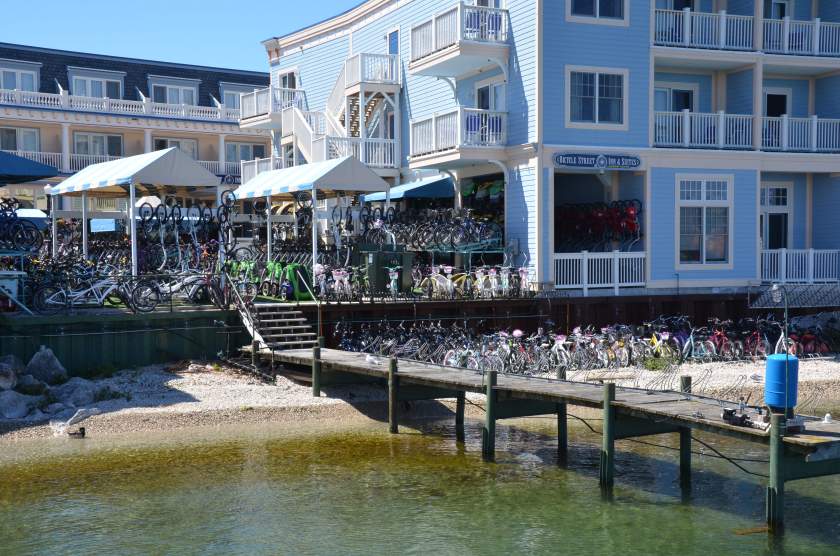 For something a bit faster than a slow-moving horse, you’ll find over 1400 bicycles on the island and good maps to guide you on your travels.  Rent a bike from your hotel or a rental shop.  The island is only eight miles around, and a bike is a great way to enjoy the nature and sights.

Mail and packages, usually of no particular interest, were noteworthy on Mackinac.  The post office was the most charming building of that type I had ever seen, and it was fun to notice the UPS guy delivering with a horse and wagon rather than his brown truck. 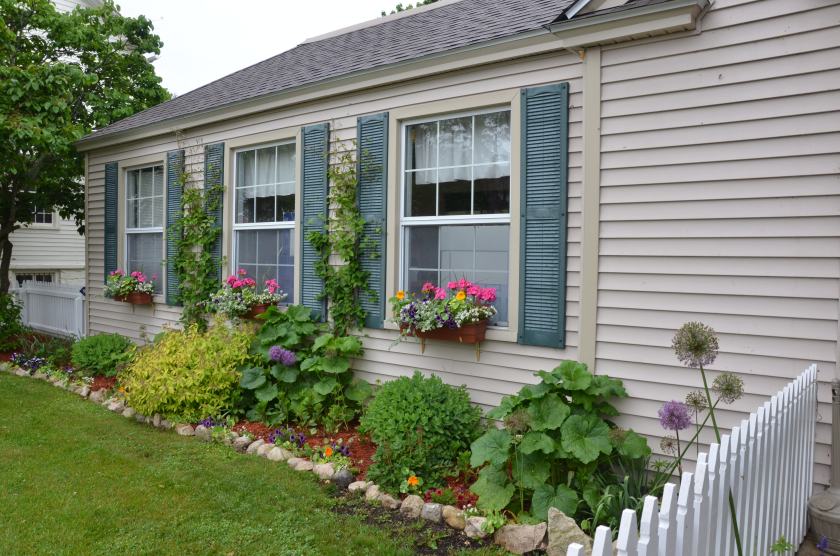 One site you’ll want to put on your agenda is Fort Mackinac.  It was founded by the British in 1780, and later came under American control.  The initial duties of the soldiers involved protecting the lucrative fur trade. The fort was eventually discontinued as a military post and turned over to the state of Michigan in 1895.  The facility was then associated with the State Park system and still is today.

Views from the top of the fort are spectacular.  Once inside, take a look at the different fort buildings.  They’re all original structures.

At scheduled times, historical interpreters in costume give programs on the Parade Ground.  The day we were there it was a rifle firing demonstration.

Back down on Main Street there’s plenty of opportunities for shopping.  My favorites were Little Luxuries and Caddywampus.  And then the fudge shops. . . . .

Apparently there’s been a tradition of “candy kitchens” on Mackinac Island since the late 1800s, and this gradually evolved to fudge as the specialty. Now there’s at least fourteen different stores that sell it.  The first and most well-known is Murdick’s.

It’s been said that the local residents call tourists, “fudgies.”  So even though as a tourist I was technically in the “fudgies” category, I was feeling smug that I wasn’t even tempted to buy some.  I’ve never cared for fudge – it always seems over-sweet and gritty to me.  But on our last night, Mike wanted to try a taste.  So we stepped into Murdick’s and bought a slice.  I have to admit, their fudge is on another level.  It’s creamy-smooth, chocolaty, and just-right delicious!

The most well-known landmark associated with Mackinac Island is the Grand Hotel, opened to island visitors in 1887.  The outstanding feature is a front porch that measures 660 feet.

Grand Hotel is considered a working museum so there is a $10.00 per person fee to enter the property.  (The amount is subtracted from your dining costs if you stay for lunch.)

Despite an occasional uppity vibe about the place, the inside is worth a look around, and the grounds are lovely.

If you continue walking on the West Bluff past the Grand Hotel, you’ll see some grand summer mansions. The flowers are beautiful, too. 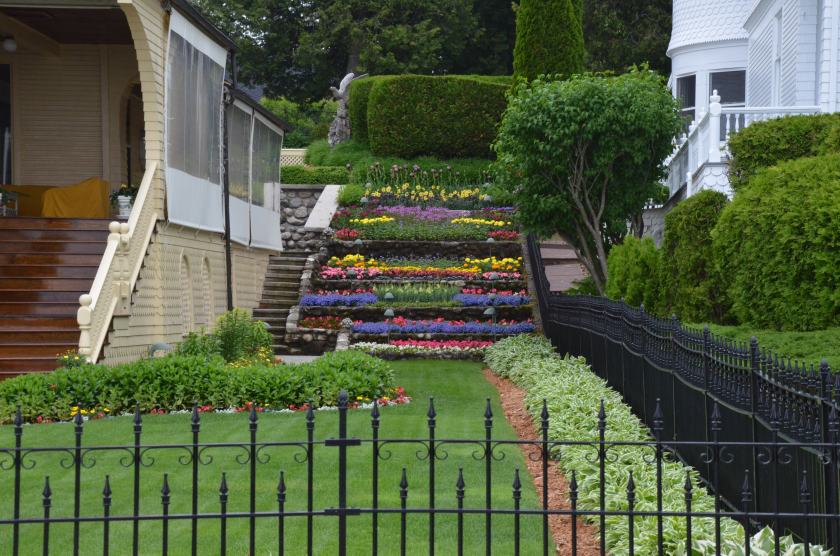 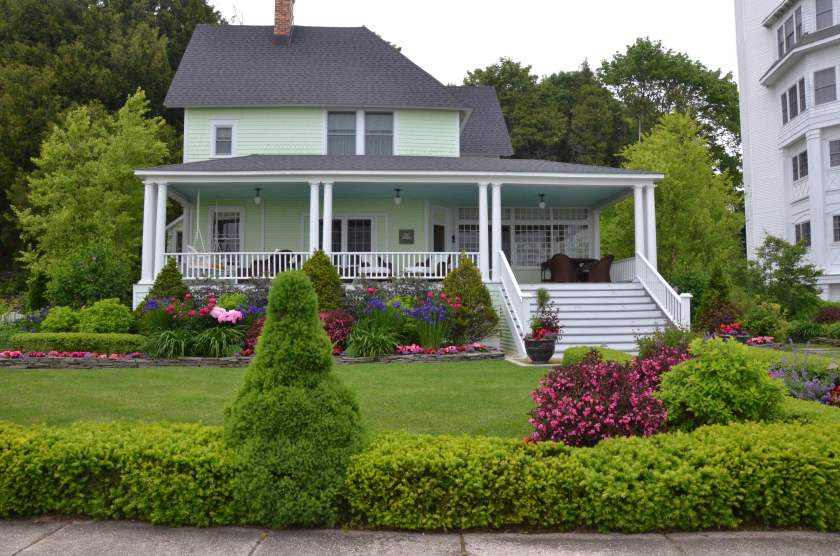 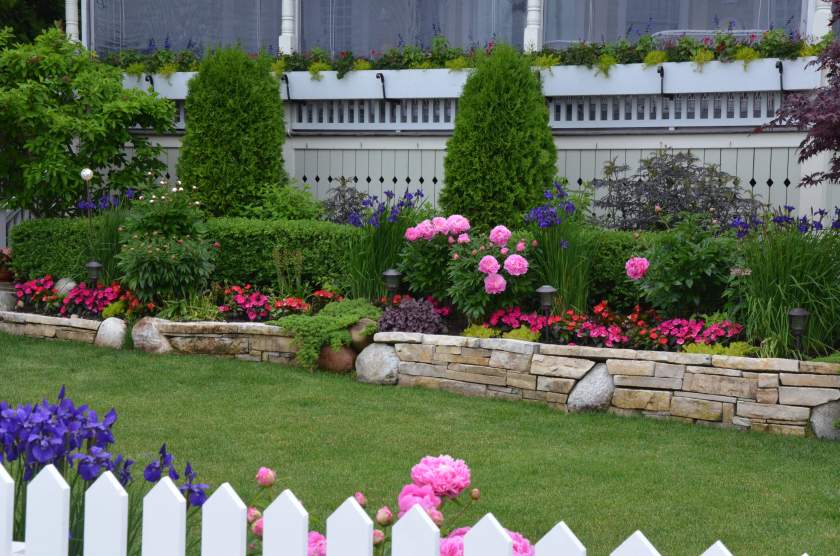 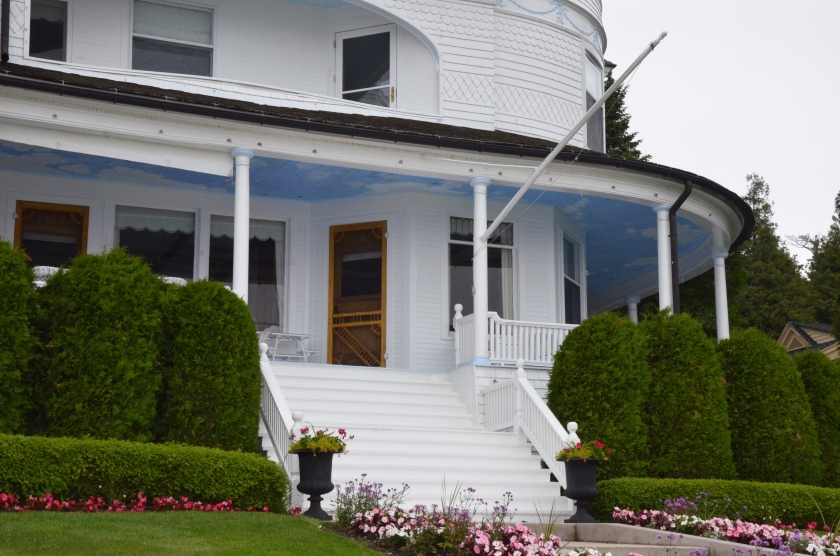 The home pictured above had the traditional Victorian blue porch ceiling painted with clouds.  In the days before air-conditioning, there was a lot of porch sitting in warmer months.  The sky-blue ceiling made the porch brighter, and reminded people of pleasant weather, even on gray, overcast days.

I found Mackinac Island a delightful and novel place to visit.  It’s the perfect step back in time!