Most people will give you a blank look when you mention Eldon, Iowa, but show them a photo of “American Gothic,” and they immediately recognize the painting.  It’s one of the most familiar images in American art. 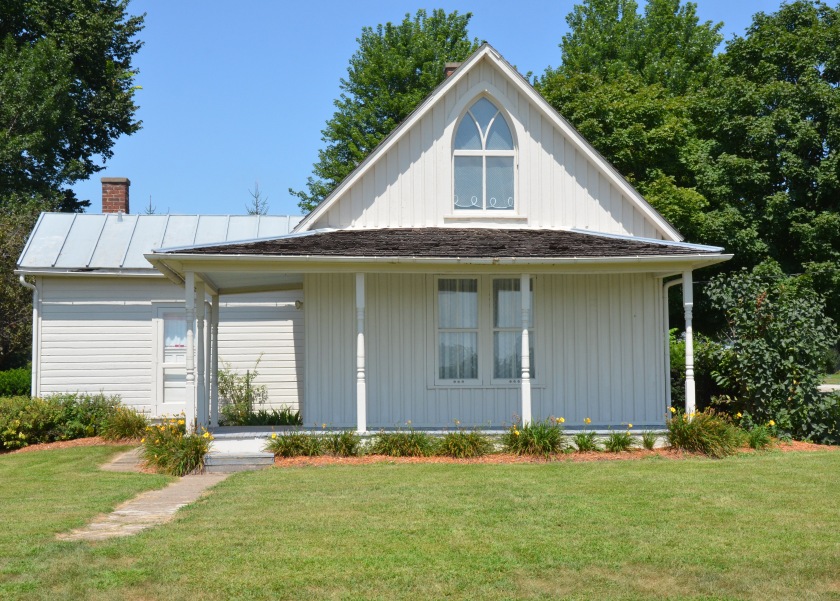 Eldon, Iowa, in the southeast corner of the state, is where you will find the actual house that inspired the artist, Grant Wood.  The story goes that Wood was visiting Eldon in 1930 for an art exhibit, and he and a friend were taking a driving tour around town.  Wood noticed the little white house and sketched it on an envelope.  Later he painted the now famous “American Gothic” in his studio in Cedar Rapids.  Wood’s sister, Nan, and his dentist, Dr. Byron McKeeby, were the models for the woman and the man.

Today the American Gothic House Center is a state historic site.  A visit includes the opportunity to see the exterior of the house and grounds as well as tour the adjacent Center that opened in 2007.  There you can learn about Grant Wood and the history of the house.  There’s also a gift shop with a quality inventory of books and souvenir items.  Admission for everything is free, but donations are welcome.

Don’t leave without creating your own American Gothic parody.  The Center provides clothes and props to dress up – then stop laughing at each other, go outside in front of the house, and strike a serious pose.  Employees can either snap a shot with your camera or use theirs and charge you a few dollars for a print.

If it’s been awhile since you’ve enjoyed an old-fashioned roadside picnic, this would be a good time to have one.  Eldon is a small town, and dining options are limited.  On Main Street, you’ll find a community park with some nice shade trees and picnic tables next to the railroad tracks.

In addition to the picnic area, the former Rock Island depot sits on the edge of the park.  Today it’s a museum of railroad history.

The American Gothic House Center is the star attraction in Eldon, Iowa.  It’s an interesting and fun visit, and I can now check that off my list!